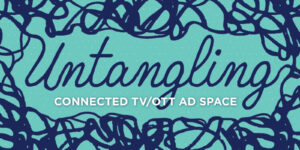 The Connected TV/OTT advertising landscape is complex. In this post, I will try to untangle it.

First, let’s explain Connected TV (CTV) and OTT and talk about what exactly each means. The acronym OTT stands for Over-the-Top. OTT is defined as video content streamed from the internet via PC, tablet, mobile phone, or television. Before Smart TVs, a device was needed to stream video on television such as Roku, Play Station, etc. So, technically a Smart TV is just another device to connect to the internet; therefore, it is part of OTT.

The terms are sometimes used interchangeably but are they the same? Depending on the context sometimes they are.

Connected TV especially refers to streaming views on a “large screen” or television. But the distinction for advertisers is that an OTT ad schedules deliver ads in streaming video content regardless of the viewing device or type of video. However, Connected TV ad schedules are served in long-form episodic or live programming viewed mostly on a large TV screen. Some Connected TV ads can be served in those types of programming viewed on mobile devices.

CTV/OTT increases the reach of any linear television buy. We all know that streaming long-form/episodic video has been on the rise and the pandemic certainly accelerated the adoption curve by consumers. Connected TV/OTT belongs in any digital video campaign and/or linear television schedule to capture the eyeballs of the most consumers possible.

When putting together Connected TV/OTT ad schedules, it is important to understand the impression inventory landscape. There are four different ad-supported groups included:

2. Set-top Box VOD, which accounts for 14% of ad views. This group also reaches the cord-stacker, and local ad inventory is not available through programmatic ad exchanges. Ad schedules can only be secured through local cable advertising sales providers.

The next two groups will reach the cord-stackers, cord-cutters, and the cord-nevers consumer.

4. vMVPD: digital-only cable alternatives: YouTube TV, Sling, DirecTV NOW, etc. vMVPD consumers can view streaming regardless of authentication or not. The same FreeWheel research reveals that this group accounts for 8% of ad views.

I also want to mention that not all streaming video is ad-supported. There is another consumer group that pays for Subscription Video On Demand (SVOD) to avoid ads altogether. And some of the streaming services play in both ad-supported and subscription landscapes. For example, Hulu and Peacock offer a free or low fee service that includes ads and a higher subscription fee for ad-free viewing.

Hopefully, this helps in understanding the Connected TV (CTV)/OTT ad impressions landscape. Knowing where your CTV/OTT impressions are being served ensures that ad campaigns can reach as many consumers as possible.