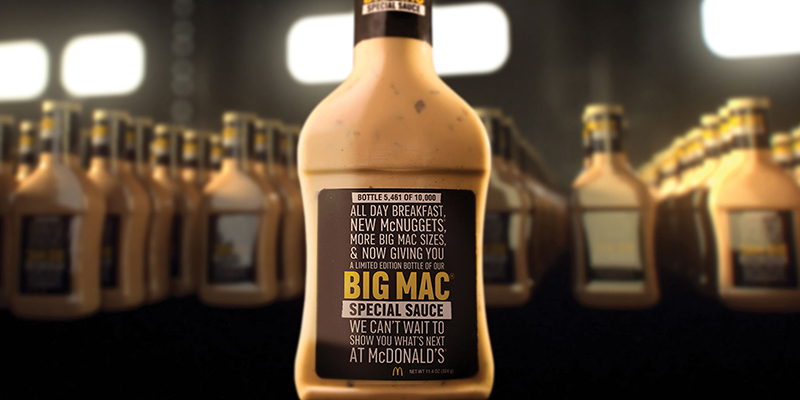 Can you still sing the Big Mac jingle after all these years? As it turns out many millennials have never even eaten a Big Mac, let alone heard the jingle.

So when McDonald’s began working on a national campaign to both raise awareness among younger generations and reignite nostalgia for the iconic sandwich, we followed suit for our clients, the Triad-area McDonald’s co-op. McDonald’s plan was to release 10,000 bottles of the signature “Special Sauce” nationwide in coordination with the launch of two new sizes of the classic: The Grand Mac and Mac Jr.

Here’s how we got people lovin’ the Big Mac in the Triad again:

Each McDonald’s region was only allotted a select few bottles of the coveted sauce, and our local Triad market was to receive only 70 to give away across more than 90 restaurants. We set a few aside for local radio stations who would also be running their own contests, but that still left us with a sizable portion to pass out. Our challenge would be to drum up excitement without leaving a large group of Big Mac fanatics still craving a Mac attack.

We focused our efforts on three stores in the Triad’s key namesake cities versus spreading out the giveaway across all 90 Triad restaurants. We teased out locations and times using the Triad co-op’s Twitter account (the main platform of our social media efforts for McDonald’s) and planned a live-stream of the giveaways on Periscope. The goal was to generate enough interest at each location to cook up some competition without disappointing any fans.

On the more traditional PR end, we arranged for Big Mac “drops” at local radio stations across the Triad, letting the colorful radio personalities at 107.5 KZL and Rock 92 convey just how much they were lovin’ the iconic sandwich live on-air. We also pitched all of our local news stations to help spread the word on as many multimedia fronts as we could.

Don’t underestimate the dedication of Big Mac fans! Before we even arrived at our first location in High Point at 8AM, a crowd of Big Mac lovers had already camped out at the bright and early hour. We set up, armed ourselves with around 30 bottles of sauce, cowbells (because you always need more cowbell, right?) and as much enthusiasm as we could muster that early, and began the giveaway at 9AM on the dot.

Anthony & KC (@minako97reviews) are camped out in High Point for their very own bottle of Big Mac Sauce! Don’t miss your chance to get yrs! pic.twitter.com/1QSmhedb6m

Within just a few minutes, all the bottles were gone, and, miraculously, no one was left wanting! We repeated this process around lunch-time in Winston-Salem and then closed out the day in Greensboro. Camped-out crowds became the norm throughout the day, and only in Greensboro did we have a few unlucky fans who arrived too late to get a bottle. But, true to the McDonald’s Lovin’ spirit, we handed out Be Our Guest cards to anyone who didn’t get a bottle so that they could get a taste of the beloved Special Sauce on us.

On the news side, we had some really great pick-up from our local stations who helped spread the word about the giveaway. We were also able to parlay those stories into longer feature spots with one of our local McDonald’s owners who is actually the grandson of the creator of the Big Mac!

We love the challenge of getting saucy with our clients — let’s add a little something special to your brand!