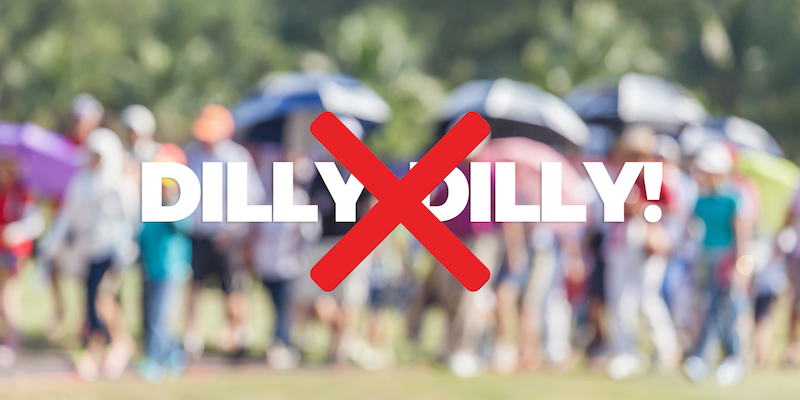 Every once in a while, a brand finds itself shoved into the spotlight—whether they asked for it or not. Sometimes it’s in a positive way: like when Wendy’s turned publicity into free marketing with #NuggsForCarter. Sometimes, not so much: remember Crockpot’s recent debacle after that heart wrenching episode of This Is Us?

But if there is one thing we know as marketing professionals, it’s that being prepared to face these surprises head on with a solid response is no longer just “helpful” for brands—it’s crucial.

They took advantage of this newfound traction quickly by expanding their original commercial into more than a half dozen others that aired almost constantly during broadcasts for the NFL (including the Super Bowl), college football, and March Madness.

Within six months, the phrase was more like a household name than a silly saying, popping up everywhere from t-shirts to Vegas sportsbooks to the play calls of NFL Quarterbacks.

After so much positivity surrounding the campaign, it seemed like only a matter of time before something ended the saying’s reign (no pun intended). It was one of the four most prestigious annual tournaments in professional golf that almost did it. Almost.

On the eve of Master’s Week in early April, it was reported that Augusta National security had been given a sheet of phrases that, if shouted, would promptly result in an escorting off the premises.

Though these rumors were dismissed shortly after they surfaced, that didn’t stop Bud Light from crafting a noteworthy response from campaign star King John Barley IV that seemingly gained more traction than the supposed ban itself:

Our King weighs in on the Dilly Dilly ban. pic.twitter.com/rVxrD5dsNf

By playing on the popularity of their already highly successful campaign, Bud Light’s response quickly went viral, gaining the praises of thousands of people across various social media platforms along the way. King Barley’s proclamation even garnered national media attention.

But the beverage giant struck gold with this response for more than just some clever copy. By paying attention to the right conversation and capitalizing on the opportunity to join it, Bud Light put themselves in a prime position to take control of the narrative and turn the attention back to their brand. It also helped them develop the campaign’s themes and personalities outside of their original expensive 30-second commercial spot. While the situation may have been handed to them, Bud Light took full advantage of the opportunity.

The age of the Internet has shown us that virality does not discriminate. Any brand can get lucky and end up at the center of a positive publicity storm without meaning to, just as any brand faces the possibility of suddenly finding themselves fighting tooth and nail to defend their reputation.

By paying attention to the right conversation and capitalizing on the opportunity to join it, Bud Light put themselves in a prime position to take control of the narrative and turn the attention back to their brand.

And though you can’t always predict which side your brand may find itself, a thorough, tactical Public Relations strategy can help you make the best of the situation – even if it’s one you didn’t ask for.